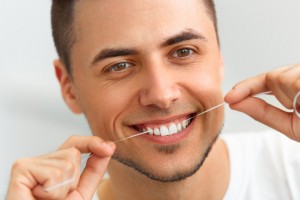 For many Americans, a dental hygienist asking, “Do you floss?” can be the most uncomfortable question of a routine dental visit.

Maybe your gums are bleeding. Maybe you flossed once or twice after your last dental exam. Maybe you don’t even know where to find floss in the pharmacy. We all know that there is something to flossing; otherwise the dental hygienist wouldn’t ask.

But according to a National Survey by the American Academy of Periodontology released in June of 2015 revealed that nearly 27 percent of U.S. adults lie to their dentist about their flossing habits.

A similar survey conducted by the American Dental Association showed that only four out of 10 Americans floss at least once a day, and that 20 percent of American never floss.

While brushing teeth may be the preferred method of tooth care, flossing twice a day has benefits that go far beyond the surface cleaning of a toothbrush.

When you eat, food particles break down and get stuck in the crevices between your teeth and gums. Over time, the food will form plaque, which is a sticky substance containing bacteria. Plaque is bad for your teeth because it creates acids that damage tooth enamel or can lead to inflamed or infected gums.

When plaque collects below your gum line, it will eventually harden into tartar. Tartar can form both above and beneath the gumline, which holds your teeth into place. When the bacteria in the tartar attacks your gums, they become weak.

Both plaque and tartar can cause gum disease or periodontal disease, which is a chronic inflammation of the gums, which leads to swelling, irritation, receding gums and even tooth loss. But periodontal disease has led to more than just tooth loss. It has also been linked to many other diseases such as diabetes, cardiovascular disease, rheumatoid arthritis, Alzheimer’s disease and even cancer.

According to recent findings from the Centers for Disease Control and Prevention (CDC), half of Americans, that’s 64.7 million Americans, aged 30 and older have periodontitis, the more advanced form of periodontal disease. With periodontitis, the gums, which support teeth, pull away from the tooth, exposing the roots to further plaque and decay.

Of course brushing with a tartar control toothpaste at least twice a day is important. But flossing at night will help prevent the buildup of plaque and tartar. Once tartar has developed on a tooth, it can only be removed by a dental professional.

Next Post
Recent Posts
Categories
Back to the top